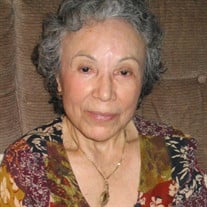 Josefa Ventura, formerly of Queens, NY, was called to join her husband Narciso “Ciso” Ventura in heaven on September 11, 2021 at the age of 89. Josefa is survived by her daughter and son-in-law, Germaine “Geri” and Howard Block; her son and daughter-in-law, William and Teresa Ventura; her three grandchildren, Rosiris Coussa, Josephine Ventura-Young, and Brian Ventura, and their spouses; and six great-grandchildren, Kaitlyn, Cara, Ashlynn, Anthony, Michael, and James. Josefa, or Doña Josefina as she was called by family, was born on October 2, 1931 in Puerto Rico to Castulo and Maria Ortiz, and was one of ten siblings. She later moved to New York where she met her husband. They married in 1953 and welcomed their daughter on November 22, 1953 and their son on December 31, 1958. Josefa was a devoted mother, homemaker, caregiver, and Catholic. She was dedicated to her family regardless of physical distance, and she is remembered for greeting guests to her home with warmth and a plate of home-cooked food regardless of the hour. After her husband’s passing in 1982, Josefa began caring for children from her neighborhood and came to be seen as a loving caretaker who treated those in her care like her own grandchildren. She was a frequent attendee at St. Rita’s Roman Catholic Church in Astoria for many decades. A viewing will be held on Tuesday, September 21, 2021 between 4PM and 8PM at Funeraria Porta Coeli in Kissimmee, FL. A funeral Mass will be held on the following day at 10AM at Holy Cross Catholic Church in Orlando, FL. The burial will be on Friday, September 24, 2021 at 1PM at St. Raymond’s Cemetery in New York City, NY. Josefa’s family asks that guests be fully vaccinated against COVID-19 or have a negative COVID-19 test within 24 hours prior to attendance.

The family of Josefa Ventura created this Life Tributes page to make it easy to share your memories.

Josefa Ventura, formerly of Queens, NY, was called to join her...

A comforting word from you means a lot.

Send flowers to the Ventura family.